Chhath Pooja is a festival of Hindu origin celebrated by the people very eagerly and with great energy. The festival itself celebrates the God of energy, also known as ala Chhath or Surya Shashti.  Everyone seeks blessings from the Lord Surya, as he is considered to be the life giver on Earth. People, in turn, celebrate the God, seek for everyone’s success and well-being, and for the health of one and all. The worship of Sun also is believed to help people get rid of various diseases. According to the Hindu calendar, it is celebrated on the 6th day of the month of Kartika (month of October or November). 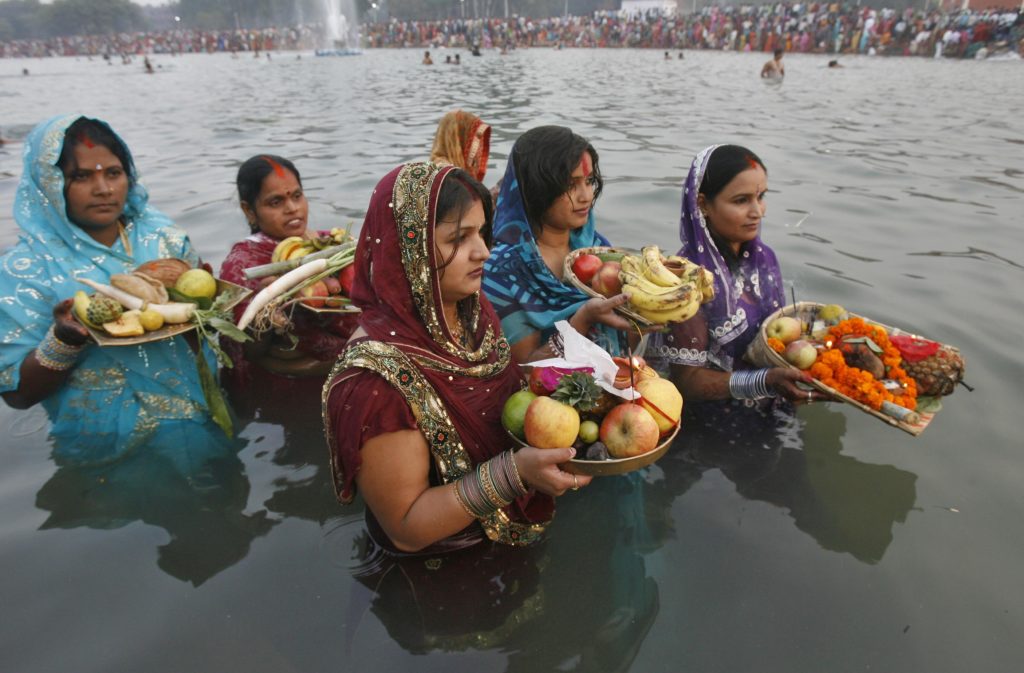 In various places, Chaiti Chhath is also celebrated in the month of Chaitra, which is during the month of April or May. The idea behind naming this festival as Chhath is because it is celebrated on the 6th day of the month.

Chhath is primarily celebrated in the Indian state Bihar. But, it also celebrated in other parts of the country by the people of Bihar who live there.

Chhath Pooja has a great significance in the Hindu religion because this day is said to be the day when the oldest of Purohits had performed the traditional pooja for Lord Sun, on the request of the Kings. The ancient Rigveda is chanted and hymns in the name of Lord Sun are also sung. Chhath pooja in the ancient times was celebrated by Draupadi and Pandavas of Hastinapur on the occasion of regaining the lost kingdom.

It has also been said that the Chhath Pooja was first celebrated by the Surya Putra Karna – a great warrior.

Worship of Chhathi Maiya (consort of the Lord Surya, also known as Usha in the Vedas) is also done on Chhath pooja. Usha means dawn which in turn means the first light of the day. People offer prayers on this day to rid themselves off the troubles and be able to attain Moksha or liberation.

Since one festival is associated with multiple stories, Chhath Pooja also has another history behind it. It is considered that Lord Rama and Mata Sita had fasted on this day for the first time and offered prayers to the Sun God in the month of Kartik in Shukla Paksha when he was coronated after having returned to Ayodhya after their exile of 14 years.  Therefore, Chhath Pooja became a significant festival and tradition in the Hindu religion.

Rituals and Traditions of Chhath Puja

Chhath Pooja is to be the period of divine and worship, and worshippers, therefore, take to a period of 4-day abstinence separating themselves from the family, post a holy bath. The time is considered to be devoted to the pure spirit, and one also sleeps on the floor with a single blanket. As a matter of customs and tradition, the Chhath Pooja has to be celebrated every year once a family starts with it, for the same belief will also be, in the future, transferred to the generations to come. Superstitions also lie in fact, that upon discontinuing the pooja, a death in the family is likely to occur.

Prayers and Prasad are offered to the Sun on Chhath. They could be in the form of sweets, Thekua – the traditional Chhath sweet.

The first day is started off with a bath early in the morning with the pure and sacred water from the River Ganga. The houses are cleaned, and all the dirt is removed, marking purity and divineness.  Only a single meal a day is taken, and this meal is popularly known as kaddu-bhat cooked only in bronze or soil utensils with mango woods over the soil stove.

The second day, a day prior to the actual Chhath Pooja,  Panchami, the worshippers keep a fast through the day and break it once the sun sets.  Rasiao-kheer, puris, fruits, etc. are a few items which are offered in the pooja. After taking the meal in the evening, a fast is observed for the next 36 hours.

On the third day, the day of Chhath, they offer the Sanjhiya Arghya at the ghat of the river bank. After Arghya, they dress up in a saree of turmeric color and the family members seek for blessings and good wishes. The night of Chhath celebrates a festival known as Kosi, which is a celebration of light, lighting the lamps of clay diyas under the covering of five sugarcane sticks. The five sugarcane sticks signify the Panchatattva (earth, water, fire, air, and space), that of which the human body is made up of.

The fourth day is indicative of Paarun and the devotees along with their family and friends offer Bihaniya Aragh at the ghat (Riverbank). The festival is ended through breaking their fast after having the Chhath Prashad.

Chhath Pooja has a special significance during the period of Sunrise and Sunset. The Sunrise and sunset are considered to be an important time of the day since during the day, the human body can safely absorb the solar energy without any harm. Also, this is the reason behind the myth that we do the Sanjhiya Arghya and Bihaniya Arghya during the Chhath festival. The low level of UV radiations favors the intake of those rays within the body. The entire idea of Chhath Pooja is to offer our thanks to the Lord Sun for having given life on Earth.

Chhath Pooja gives the body a sense of calm and composure, helps energize the body and make it immune, it also reduces or rather eliminates all the negativity (anger, jealousy). Traditional beliefs also say that the Chhath Pooja slows down the process of aging.

Just like any other of the Hindu festivals, Chhath Pooja also has multiple significances, and all of these make the festival significant and auspicious.

Almost round the corner, it is among yet another of the much-awaited festivities for many of the people since it is their time to celebrate, indulge into things they like and of course, feel a little closer to peace.