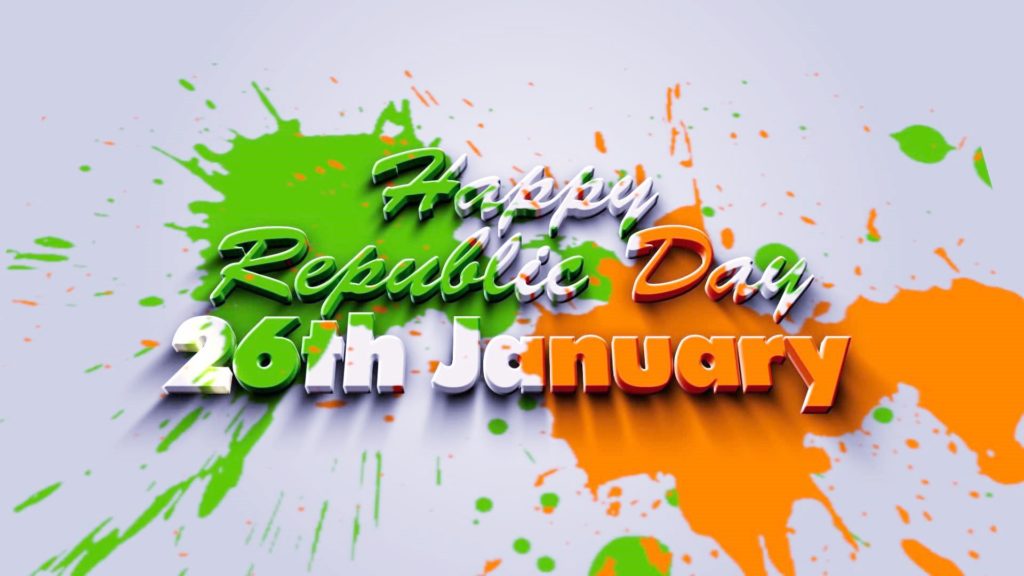 The constitution came into function by the constituent assembly on 26 November 1949 and was effective from 26 January 1950m making India a democracy.

People often question as to why we have the 26th January when we already have 15th August. The logic and the story behind the same is the fact that it was on 26th January 1930 that the Declaration of Indian Independence was made by the INC (Indian National Congress) to the Dominion status offered by the British Regime. India was, supposed to get its freedom a lot before 1947 actually, however, many failed attempts led to the delay and several movements.

Republic Day has been declared a national holiday, the other two being Independence Day and Gandhi Jayanti.

India had finally received its freedom from British Rule back on 15th August 1947 which was a result of the various movements that worked in favour of the freedom. Independence was a result of two major movements led by Mahatma Gandhi – Non-Violence resistance and Civil Disobedience. The independence had come through the Indian Independence Act 1947 (10 & 11 Geo 6 c 30). It was an Act of the Parliament of the United Kingdom partitioning the British India into the two new independent Dominions of the British Commonwealth (later Commonwealth of Nations): India and Pakistan.

When Indian achieved its Independence, it was under the monarchy of George VI as head of state and Earl Mountbatten as governor-general.  Back then, there wasn’t any rigid constitution, and there were only laws which were on the grounds of the modified colonial Government of India Act 1935.

It was on 28 August post independence that a committee was appointed, the Drafting Committee that is to, to frame a permanent constitution. Dr. B.R. Ambedkar was made the chairman of this committee. Independence Day is celebrated solely for the freedom from British rule, and Republic Day is celebrated for turning India, the nation to Indian, the country. It was only after the time period in between that the 308 members of the committee were able to draft the document. On 24th January two copies of the document were prepared (one in Hindi and one in English), and it was two days later, on 26th January 1950 that the Constitution came into effect.

Celebrations on Republic Day include nothing but various processions, parades, and hostings in the so many places all over India.

The celebration in New Delhi at the Rajpath is the main celebration that happens in India. It is only before the President of India that all the ceremonies are ranging from parades to flag hoisting to a tribute to the country take place. The entire procession is nothing but a reflection of the Unity in Diversity in India.

In 2016, on the occasion of the 67th Republic Day, the Protocol Department of the Government of Maharashtra held its first parade on the lines of the Delhi Republic Day parade along the entire stretch of Marine Drive in Mumbai.

Delhi Republic Day parade is held in the capital, New Delhi. It starts off at the gate of the Rashtrapati Bhavan (the President’s residence), Raisina Hill to Rajpath past the India Gate. The parade is a treat to watch and is a major celebration held over the 3 days starting from 26th January. The parade is nothing but a sum up of the Indian heritage and culture.

It has a total of Nine to twelve different regiments from the Indian army with a march past in just the right kind of decorations. The salute is taken by the President of India – the Commander-in-Chief of the Indian Armed Forces.

The Beating Retreat ceremony is a ceremony that marks the end of the 3 day affair. It is held in the evening of 29th January and has three wings of the military performing – the Indian Army, Indian Navy and Indian Air Force. The venue for this is Raisina Hill and an adjacent square, Vijay Chowk.

The Chief Guest for the proceedings is the President of India who is escorted by the (PBG), a cavalry unit. A national salute upon the order of the commander is given on the Presidents arrival and is followed by the National Anthem (sung by the army). Later on, the proceedings are continued where bands and regiments perform and also play popular tunes meant ideal for the day; the most famous of them all, Saare Jahan se Acha being one of them.

On this day, many recreational fairs are also held in various parts of the country. It is a major day for celebrations, and everyone thoroughly does make the best of it. Book fairs are also a popular part of such days which extend over later on.

Republic Day sure does mark a day of celebrations!

Check Out the Best Quotes and Poems by Clicking Here