Halloween is a time of the year when there’s a vibe of ghosts and spirits all around with kids all dressed up as scary goblins and ghosts asking for trick-or-treat as they move around their neighborhood.

The history of Halloween goes back to more than 2,000 years to a pre-Christian festival which is called Samhain, meaning summer’s end. However, since there isn’t much documentation on the same, little is known about the festival. All that’s said is it was a communal meeting held at the end of the harvest year when the material for the winters was gathered and animals brought back from the pastures. In addition to that, Samhain is said to be a time to commune with the ones who are dead, or at least, so says a forklorist, John Santino. There are many contradictory views about the same, and many scholars believe otherwise since there isn’t any major evidence to proof the same.

While some believe in the concept of death and ancestor worship, others simply zero down on the time when the seasons change, and people prepare for dormancy.

Of all the days, Halloween is celebrated on the 31st of October because Samhain is said to have taken place between fall equinox and winter solstice, and, on the calendar, the date corresponds to Oct 31 and Nov 1.

Back then, costumes were just a way to disguise oneself, or, an ensemble to help in the skits and plays. However, all that the concept of the costume is associated with is that of disguising oneself and going to the neighborhood asking for food. It has been associated more with the practice of mumming and guising. 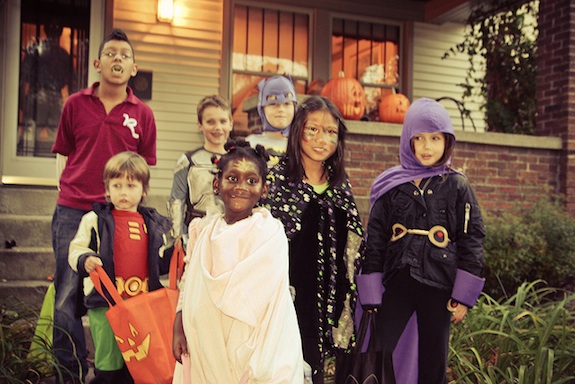 Also, since there’s so much related to the dead on Halloween, the concept is also associated with souling, which was a practice in Britain and Ireland, where the poor would knock doors on Hallowmas (Nov. 1) and ask for food and in return, they would offer their prayers to the ones who are dead.

Post world war II, the US started with Trick or treating on the occasion of Halloween since the Americans were accustomed to something similar on Thanksgiving.

Halloween is celebrated with trick-or-treating in the United States, Canada, Ireland and the United Kingdom. Over the years, Halloween has seen considerable changes over time, but the festivity and the excitement for the festival remains.

Other additions to the festival include the games and pranks that are played, which at a point of time had turned really serious. Then there are pumpkins which are used in various shape cutouts with a light inside, which too, has a history to date back to. It is said that a man, who seemed to have tricked the devil too often, when died, did not find a place in hell or heaven; all he was given was a coal to find his way. And, he chose to put that coal into a tulip which lighted his way, and that’s how the concept of pumpkins came in!

The regular costumes, trick-or-treating and candies continue to be the highlight of Halloween!